South Kerry Fenian and deported convict John Golden was born at Kells, Cahersiveen in c. 1845. Evidence suggests that Golden was a carpenter, who as a teenager, joined the local Filemore Fenians. Perhaps his membership relates to an incident from his childhood, in which his father’s landlord, Blennerhassett, shot his dog. This event is likely to have increased Golden’s hatred of British rule in Ireland.

Irish Fenians planned a rebellion against the British Government for February 1867 but this event was subsequently postponed. However, South Kerry Fenians did not receive this news and they rose in arms on 12 February 1867. The Rising saw approximately thirty Fenians leave Cahersiveen at 10:00pm and travel to Kells to join with Golden and the Filemore Fenians. At Kells, Golden played a leading role in the raid on the coastguard station.  Later accounts of the Fenian at Kells depicted him as ‘golden haired and slight, the youngest and most active of them all’.

As the Fenians proceeded, they met Constable Duggan of Killorglin RIC at Drung Bridge who Conway shot. The Fenians carried Duggan to a local cottage and summoned a priest. By 7.30am, the rebels had reached Glenbeigh, by which point they knew that their rebellion was in vain, yet they continued their journey towards Killarney. However, by the following morning, the group had disbanded and were returning home, avoiding roads, police and soldiers.

Golden was unable to return home as it was under surveillance and searched on 14 February and in March 1867. He returned to Cahersiveen and remained in hiding in Killoe and Kimego, before making his way to Liverpool. From there, he wrote a letter to his associates in Cahersiveen and informed them of his plan to travel to America on board the Propontis. However, this information was leaked and police captured Golden on 19 July 1867 in Queenstown, Cork. When arrested, Golden gave his name as John Neill and held a passage ticket and two documents certifying his name.

Golden was tried for treason on Thursday, 8 August 1867. The outcome of the jury’s forty-minute deliberation was a guilty verdict and Golden was sentenced to seven years imprisonment (later reduced to five) and transportation to Fremantle Penal Settlement, Western Australia. An event relating to Golden’s trial refers to his mother, who while pregnant with her eight child, walked forty-two miles from Kells to Tralee for the trial. Following his sentence, Golden was taken to Mount-Joy Jail, Dublin and onto Portland, England, where on 7 October 1867 he boarded the Hougoumont, bound for Fremantle. On board, Golden and the other Fenians published a magazine entitled The Wild Goose.

On 10 January 1868, the Hougoumont reached Fremantle. The Fenians were imprisoned and put to work locally, where Golden and others worked on Clarence Road. Here a mutiny occurred, resulting in the Fenians being sent to Perth for a week’s confinement. Following this Golden was dispatched to Bunbury, where he and other Fenians refused to work when separated. They endured seven days of bread and water as punishment. When this refusal was reaffirmed, Golden was returned to Fremantle for further solitary confinement.

May 1869 saw Golden being issued with a Free Pardon from the British Government and on his release, he worked in construction with other ex-convict Fenians. On the 11 May 1871, Golden and four others boarded the Queen of the South bound for Lyttleton, New Zealand. On arrival the five men were immediately arrested due to a ban on all ex-convicts entering the country. They appeared before a magistrate and were remanded for a week. The charges were dropped against Golden on 13 June, as his five-year sentence was exempted with his free pardon. Golden and the four others departed New Zealand on board a cargo ship and reached New South Wales on 27 June 1871.

In Sydney, Golden met Irishman John Feehan who owned land at Gerringong, New South Wales. Golden moved to Gerringong to work on Feehan’s farm and on 12 January 1875, he married Feehan’s daughter Ellen. After the birth of his first son, Golden moved his family to Jamberoo, where he worked as a carpenter. Early in the 1880’s, the family moved to 33 Prince Alfred Street, Boughton Creek (Berry). Golden had seven children, the youngest of whom, Thomas, was born his death. He died of congestion of the lungs on 2 September 1883, aged 38 years and is buried in Gerringong cemetery. After his death, Golden’s wife, Ellen married Charles Robinson and the family lived in Golden’s home in Berry until Ellen died in 1938, aged 90 years.

The commander of the South Kerry Fenians was John James O Connor. A native of Valentia 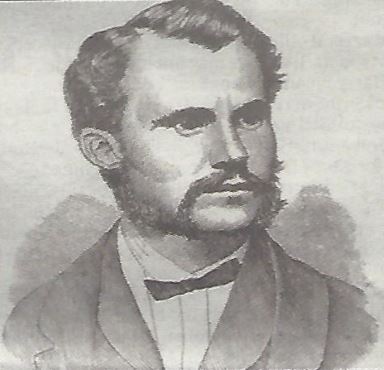 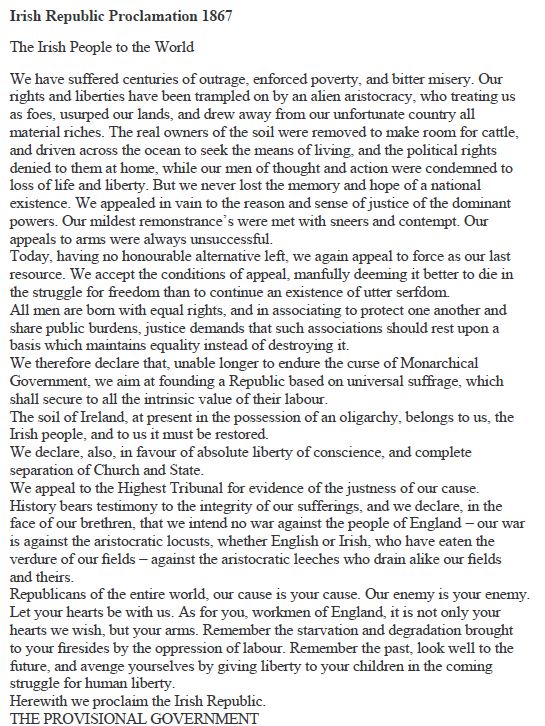 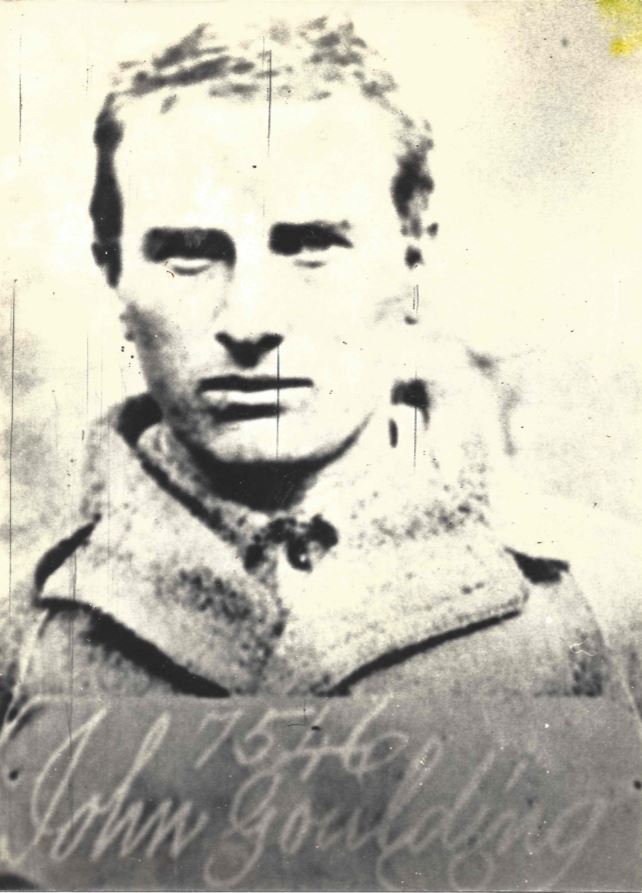 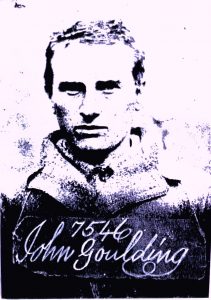 Pardon issued to John Golden in 1869 from the Governor of Western Australia. 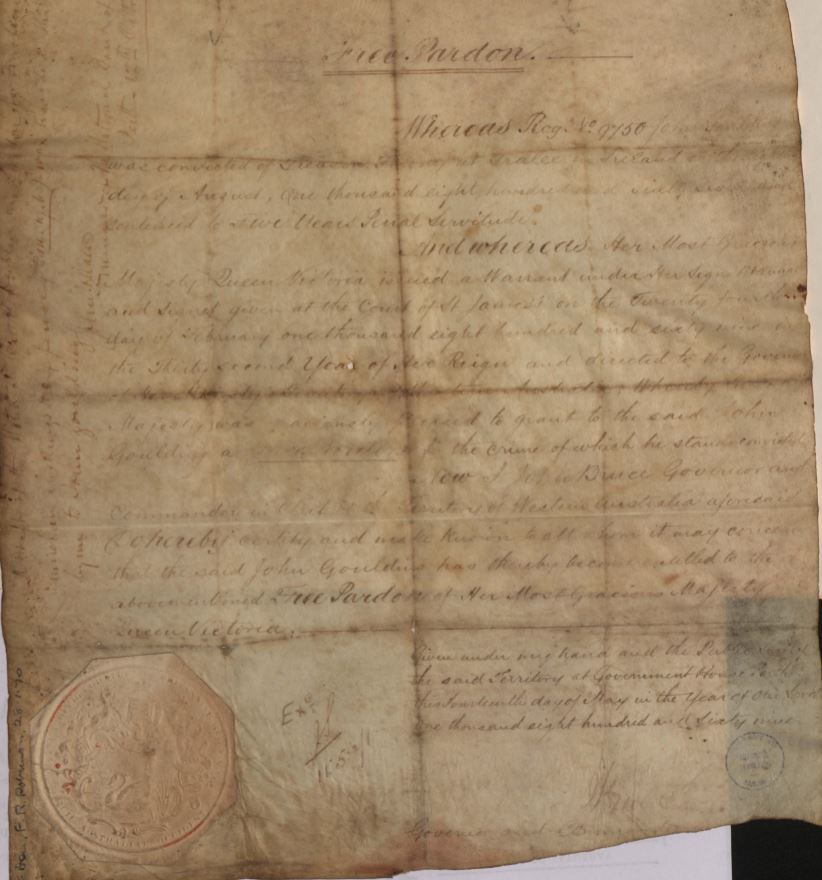 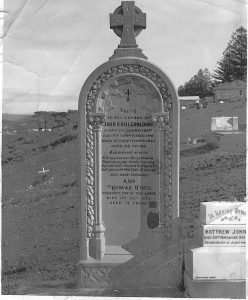 The inscription on the gravestone reads:
Fearing not nor too confiding
Trusting in your leaders guiding
His who ne’er forsook betrayed you
Aid yourself and God will aid you
GOD SAVE IRELAND 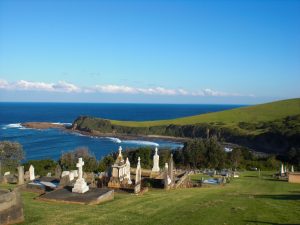 View from the graveyard at Gerringong, New South Wales. 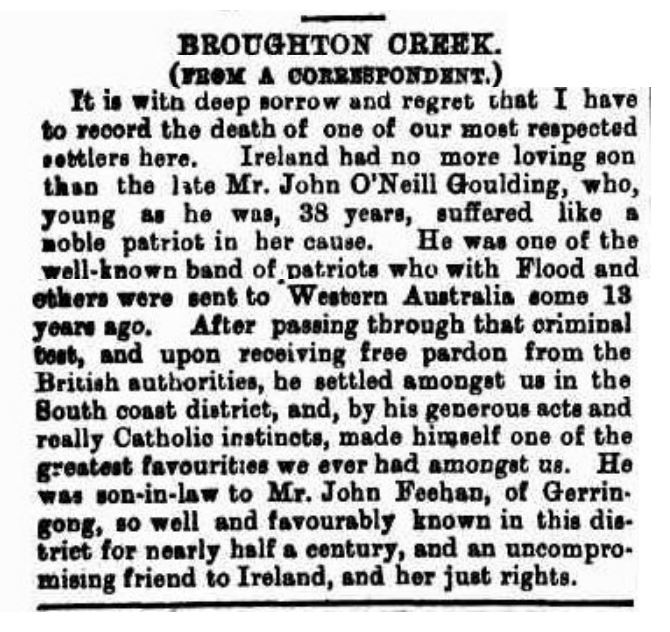 Poster from the 1967 Commemoration in Cahersiveen: Feb 1967 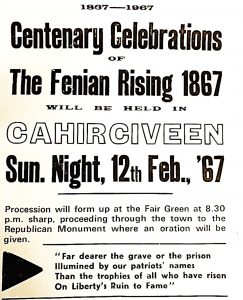